““My aim is to make timeless music. Music that will still sound fresh 20 years from now.”” - Shawn Cook

Raised between The Bay Area and Chicago, rapper/singer/songwriter Shawn Cook (formerly known as Vital) spent his childhood performing for his mother’s friends at church-sponsored stage plays.

“By the time I got to 13, even though I was from California, I was different because I used to rap with an east coast style,” explained Cook. “Everybody in my neighborhood used to be like, ‘Dawg, he different.’”

Growing into a young man, he found himself inspired by artists including James Brown, Michael Jackson, Slick Rick, and Wu-Tang Clan along with Bay Area legends Mac Dre, Too Short and Dubee.

“I always knew I had a voice, but I never wanted to use it because of (what) I was going through,” he recalls. “Because I was angry, I wanted to express myself through Hip-Hop. It was really rough growing up. I didn’t want to sing it to you; I wanted to rap it to you.”

Making some moves around the country, Cook eventually dropped his debut project The Best Kept Secret independently. By the time 2004 rolled around, he released his WashHouse debut Failure Is Not An Option.

Around that time, Cook also found himself getting closer to Mac Dre before his untimely death shook The Bay Area’s Hip Hop community.

“He[Mac Dre] was just my big homie,” explained Cook who ended up being featured on Mac Dre’s The Game Is Thick Part 2 album. “He would come pick me up, take me to the studio. He would have to come find me. He would pick me and he would run around with me.”

He would eventually link up with Berner of Wiz Khalifa’s collective Taylor Gang. This led to a breakout feature with Berner’s “All in a Day” single, also featuring YG and Young Thug.

“I originally wrote that song for myself because I was trying to put out an album,” explained Cook.

In 2018, Cook released, “The Silky Slim LP” his first project under  the "Shawn Cook" banner. "This project,  Cook explains, is dedicated to Mac Dre who also went by Silky Slim"

This all sets the stage for his upcoming concept EP titled “Claudette”, featuring the lead single “Stay.” According to Cook, the song reflects a "reverse carousel" inside a toxic relationship with magnetic attraction creating a infinite loop of pleasure followed by misery .

Cook remains intent on altering the barren terrain of pop music. His refreshing sound invites a rare listen without prejudice that has much to offer those who are brave enough to unplug and engage.

“I'm all about energy. Energy in life. I can feel the present energy from a mile away,” he said. “I don't like negative things or like negative people. That’s what I want to present in my music.” 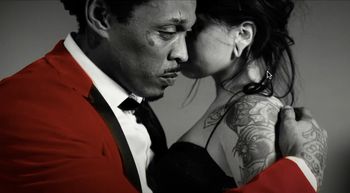 LISTEN TO "STAY" FROM THE FORTHCOMING 'CLAUDETTE' EP